A History of St Mary’s

In our 125th year, we celebrate everything St Mary's in a series of "through the decades" history booklets compiled by David Rymill: 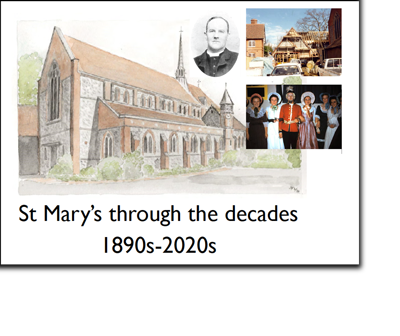 There is also a summarised history compilation for St Mary's 125th year as our parish church. It can be downloaded HERE

A History of St Mary’s: VOICES. This oral history exhibition has been made possible by drawing on the memories of some members of our church community

The present St Mary’s Church was opened in 1895, but a medieval stone and tile in the porch are clues to the parish’s much longer story, which explains why the church is usually called St Mary’s Cuddington, but serves parts of Worcester Park and Stoneleigh.

The beginnings of Cuddington

More information about St Mary’s can be found in a history of the church and a booklet about the stained glass windows, both on sale in the church, and in two local history books available at Buckwheat Press.

The name Cuddington is believed to mean “Cuda’s farm”: Cuda was perhaps an Anglo-Saxon who founded a settlement in today’s Nonsuch Park. The first Cuddington church was probably built of wood, before the Norman Conquest, near the right-angle in the avenue in Nonsuch Park. It was replaced with a stone church in c1100, rebuilt in c1250; this medieval St Mary’s stood until 1538.

A parish without a church

In 1538 Henry VIII demolished Cuddington church and village to make way for Nonsuch Palace, and for 300 years the parish had no church.

Gardeners reading this quote from the antiquary John Leland will be familiar with our "Cudd Mud" - almost impenetrable clay that was used for mould making and for bricks and tiles.

When the palace fell into decline, its former Great Park, known as Worcester Park after the 4th Earl of Worcester (appointed Keeper in 1606), was divided into five farms.

In 1859 the railway brought Worcester Park within half an hour of London. Large villas were built in The Avenue, and the new residents wanted a church. The present site was selected, about two miles from the medieval church, and a temporary Iron Church was opened in 1867, just to the east of the present building.

In 1894 work began on the permanent church, designed by local architect John Alick Thomas of Whitfield and Thomas.

The church was designed with a five-bay nave, but in the 1890s there was no need for a nave of this size, so only three bays were built, with a temporary west wall and small porch. Most of the windows in this section contain stained glass dating from the 1890s-1910s, some by Clayton and Bell, and A L Moore. St Mary’s was opened in November 1895, and in 1896 was declared the parish church in substitution for the medieval church.

For another 40 years the district remained mainly farmland, largely owned by the Stone family and known as the Stoneleigh estate, but in the 1930s most of Worcester Park and Stoneleigh was developed. Parts of Cuddington parish were transferred to the new parishes of Stoneleigh and Ruxley Lane, but the church was still crowded, so the final two bays were added on the west end in 1959. In this part of the church there are several stained glass windows by Lawrence Lee, whose work can also be seen in Coventry Cathedral.

The latest major change came in 1995, when a complex of meeting-rooms was added on the north-west corner, replacing the two church halls. All three phases of the church are built in brick and knapped flint.

St Mary the Virgin, Cuddington Parish is in the Diocese of Guildford